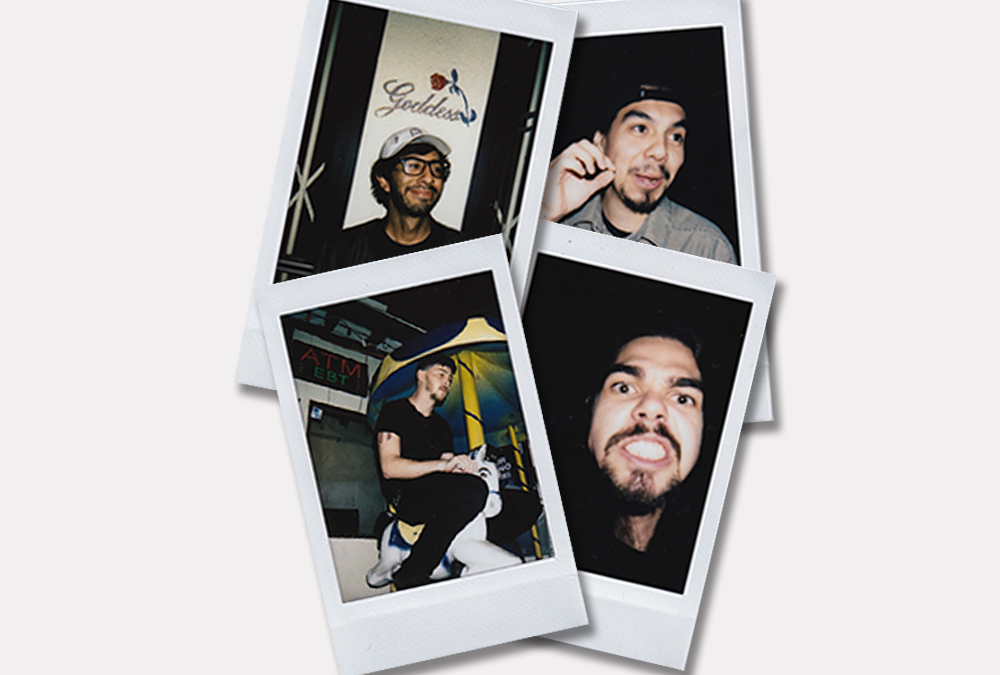 Welcome to Volume 06 of Upswing’s The Show Must Go On Series. This week, Marla had the opportunity to interview Cat Like Thief, a punk rock band who kickstarted their career at Emo Nite LA. Cat Like Thief has four members: Nick Popescu, Matthew Perreault, Carlos Alvarado and Coyotl Pena, and they just released their latest EP called Noise. Let’s get to it.

MM: So, you guys met at Emo Nite. Are you all from the area, or was Emo Nite a tool to connect with like-minded people as transplants?

Matt grew up in Massachusetts and came out here when he was 23, so lots of kudos to him. Coyotl grew up in Los Angeles so this is his home. Carlos grew up in the same area I did, but traveled while growing up. Little did I know a guy who I went to the same middle school with would be in my band years later.

I grew up in Cathedral City, just two hours east of LA. Moved out to LA in the summer of 2013 and my friend, Jesse Gilbert, introduced me to the head honchos behind the whole event. Next thing you know I ended up working for Emo Nite and grew these relationships with some of the best people I’ve ever met. Growing up I didn’t listen to much Emo music. It was mainly punk, pop-punk, rap/hip-hop, and metal. I’ve never seen such love, not only for the music, but for the community overall. It filled my heart with such joy and couldn’t be more grateful that because of them, I am in a kick-ass band.

I am actually from the Highland Park/Lincoln Heights area. I was always involved in the music community and honestly didn’t even get into Emo music until I was 13/14. I honestly went to Emo Nite, (At the time it was called “Taking Back Tuesday”) for myself. I needed to get into a new head space and at ENLA I found a whole new world, essentially. Never did I think, years down the line, it would change my life and have this amazing family around me, let alone be in a band because of it!

MM: Also, how did you actually get to know each other at their parties, let alone decide to become a band? The atmosphere there isn’t exactly conducive to sitting around and having a conversation, and I mean that in the best way possible. Are you earlier fans of theirs, or did you meet waiting in those crazy long lines?

Honestly if you take the time away from the craziness inside, you can go outside or upstairs and connect with people that have similar or different interests! A lot of my favorite memories are just from being outside and conversing with friends and strangers. The energy is so intense that everyone is feeding off of it with each other. Thankfully I never had to wait in the line. Those who do are truly crazy, in the best ways possible.

Call it the calm before the storm. Matt & I honestly hung out a lot in the line. It was where I was able to talk and take time to be with people. My friends and I would show up early, purely to be able to spend time together. It went from just hanging at ENLA to becoming a family with everyone

MM: What made you land on Cat Like Thief as your band’s name? What were some of your other contenders?

Before meeting with Matt & Coyotl, I was going under a different band name. We all decided that with this band, we wanted to start fresh. So I made a list and the name “Cat Like Thief” popped out to us. This was before we met Carlos, so he kind of got swindled into it, I should say. But here we are now! Worked for us so far.

MM: Who are some of the bands that influenced your music?

Blink-182, Green Day, Descendents, and Nirvana to name some off the top of my head.

The Early November, David Bowie, The Beatles, and System of a Down to name a few.

Pierce the Veil, Suicide Silence, Lamb of God, and of course blink-182.

MM: You recently released an EP called Noise. What message did you want to convey in those five songs? How about your music in general?

I just wanna make people move honestly. With my background in metal, mosh pits played a huge part in my inspiration with live music, so seeing people go nuts to music I created is the coolest thing ever.

That’s a good question. I didn’t go into the songs wanting to convey a specific message, we just want to create music we want to hear and what makes us feel…alive, for lack of a better word. When someone feels connected to one of our songs, that is truly an awesome thing to hear. I just want our music to be therapy for people when they need it, if that makes any sense.

For me personally the music that we create and continue to create is…I guess less ‘blamey’. I didn’t want to go about making emo music, seeming like the victim, blaming others for the situations and problems in my world. I wanted to help others, connect with people emotionally.

The message, for me at least, is to let people know it’s ok to feel your emotions, especially with the craziness going on right now. I didn’t want to escape the noise that is outside, more to acknowledge it and to contort the frequencies to these 5 songs. Show to others that they aren’t alone with what’s going on in their head. My solo’s may not be the flashiest things, but I am expressing & talking with my guitar. I listened to what Nick & Matt were singing about and felt it is my job to express that same emotion, through what I play. We all adapt to what we all play. I love our music for that reason.

The internet has been a massive reason we even were able to get our name out there. We have never toured. We’ve played LA venues and one show in Santa Ana. We were trying to plan a tour for the summer, but with the current timeframe, we need to adapt & improvise on how we can still show our live energy, not just in person, but online, too.

Right now is the best time for any artist to get their name & face in front of people. Artists should look at what is happening as a massive opportunity to be in front of their craft. Everyone is stuck and constantly on their phones. If you are not putting content out there or showing that you are taking this time to grow, you are going to be caught in the flood.

MM: Seeing live music in full form again is going to be epic. How do you envision your first show back?

Playing live is my favorite part of being in a band so I’m really excited for whenever we get to come back and perform.

Either with Emo Nite or a sold out show at The Roxy or The Troubadour in LA. I like to dream big & put things out into the universe. I definitely want the show to be bigger than we expect and we will make it happen one way or another.

Our first show back I will be very emotional about it. The only dreams I have left are to be back up on stage to play these songs live for people. To be able to release, it’s really difficult for every artist out there. We all want nothing more than to come back and to see everyone.